In the mid to late 1800s, six siblings named Noonan migrated from Kildorrery, County Cork, Ireland to Australia. One of them was our ancestor, Mary Noonan, later known by her married name, Mary Black (1861-1930). It's not known if the five sisters and one brother travelled together or separately, possibly assisted by family members already arrived. In either case, from 1873 our Noonan siblings started appearing in marriage records in Victoria, Australia, with later documents showing them living in inner-city Melbourne (especially the suburbs of Brunswick and North Melbourne). Aside from Mary, the émigrés to Australia were: James (1844-1924), Bridget (1847-1913), Johanna (1855-1945), Catherine (1857-1905) and Elizabeth Noonan (1865-1896). Three other siblings (Margaret, John and Timothy) appear to have remained behind in Ireland. 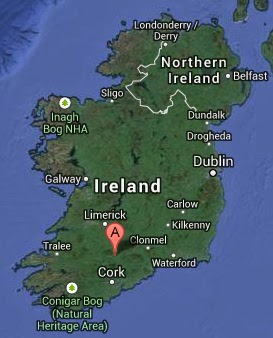 Kildorrery, where the siblings were born, was an inland rural area close to the border between County Cork and County Limerick. Their father, Timothy Noonan, was a tenant farmer in the 'townland' of Oldcastletown, leasing from the Earl of Kingston. He may have been the same Timothy Noonan who in 1853 was leasing property in the townlands of Glasvaunta and Ballyvisteen. All three townlands were close to each other in Kildorrery parish. The siblings' mother, Catherine Maume, was from another Kildorrery family. An earlier record of Noonans in the area is the 1766 Religious Census, which shows a John Noonan and a Denis Noonane, 'papists' - meaning they were of the Catholic religion (1). The spelling variation Nunan was also used in early church records of our family. 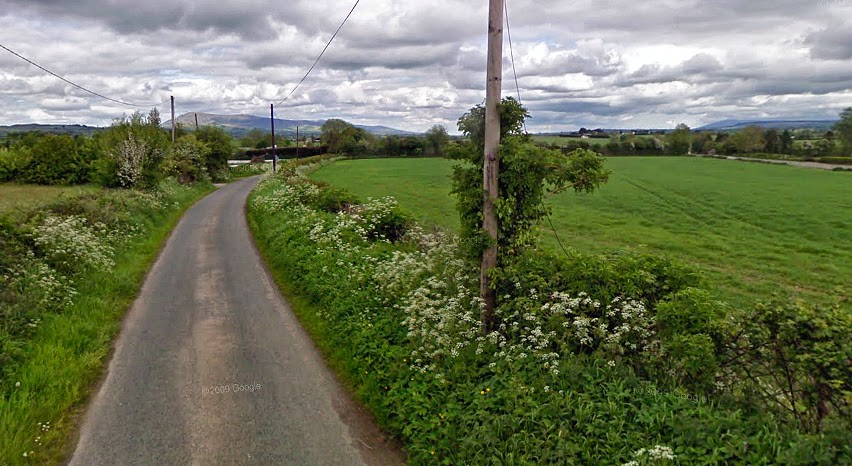 By the early to mid 1800s Kildorrery was a village surrounded by small farms. For most of the Irish population the diet was based on potatoes. Centuries of legalized oppression of the Catholic majority had left a deep mark on the country. Our ancestors may not have been the poorest of the poor but life would have been tough. Timothy Noonan and Catherine Maume married in 1841 and their first known child was baptised in 1844. They were about to be met with a national catastrophe. From the mid 1840s, the potato crops all over Ireland were destroyed by disease. This 'blight' went on devastating the staple food supply for years afterwards, with terrible consequences. It was called the Great Famine.


"During the famine approximately 1 million people died and a million more emigrated from Ireland, causing the island's population to fall by between 20% and 25%..." (2)

Born in 1861, our ancestor Mary lived after the famine, but her family and community had recent experience of it first hand. Mary's parents and her siblings born during the famine survived, but others in the wider family may have not. Certainly Kildorrery was affected. A vast migration out of Ireland began during the famine and continued long after. Mary and her siblings became part of the post-famine exodus. 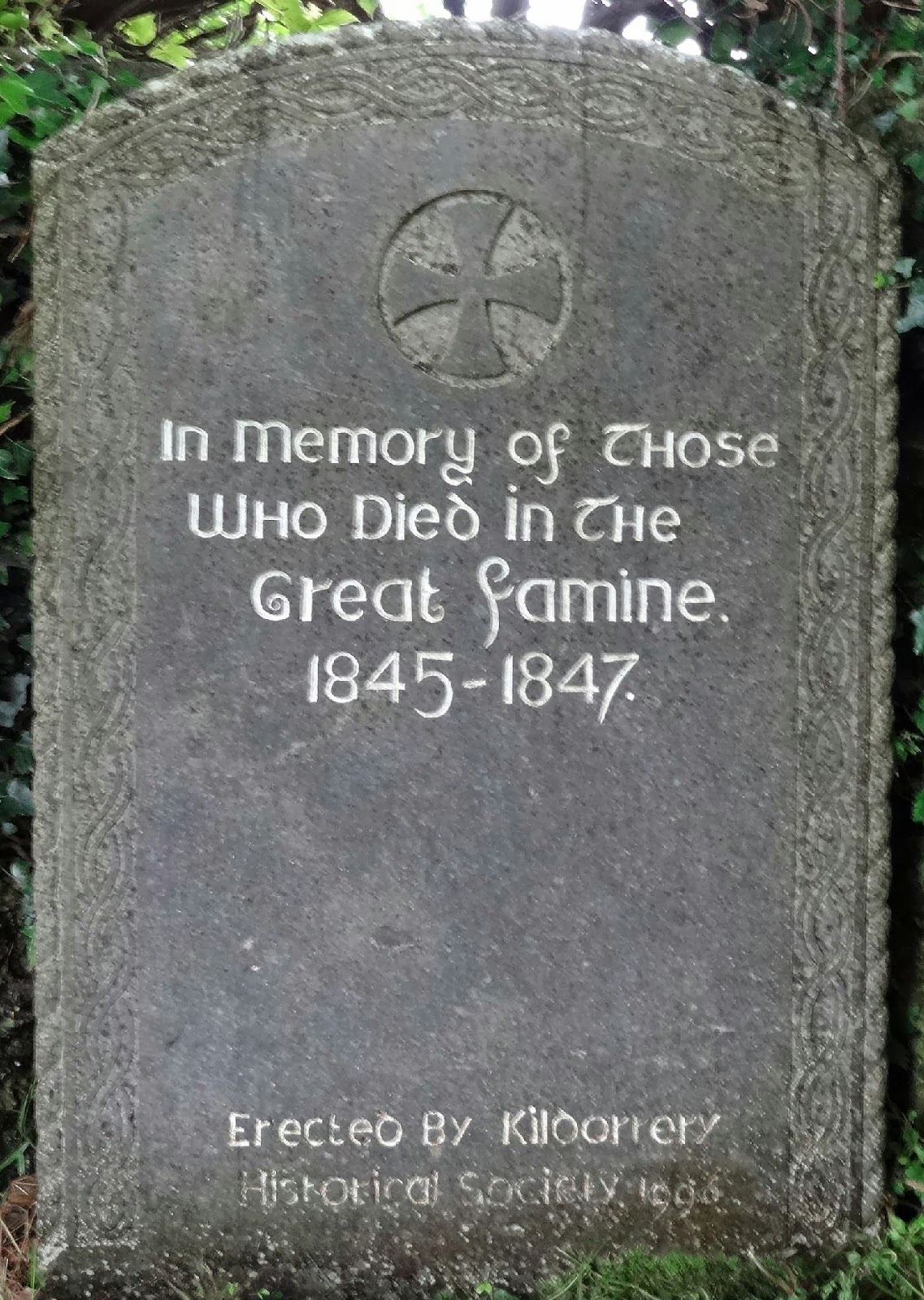 Mary Noonan married William Black in Melbourne, Australia on 15 April 1882 at St George's Catholic Church, Carlton. The priest who married them was James Hannessy O'Connell, nephew of the Irish national hero, Daniel O'Connell (3). The marriage certificate shows that William was a labourer from County Derry, in Northern Ireland (other records narrow this down to Macosquin, near Coleraine, County Derry). Mary was aged 21 and William was 23. A few year's earlier, Mary's sister, Johanna (Hannah) Noonan, had married William's brother, John Black. The families of the two couples lived nearby to each other in Brunswick for many years. 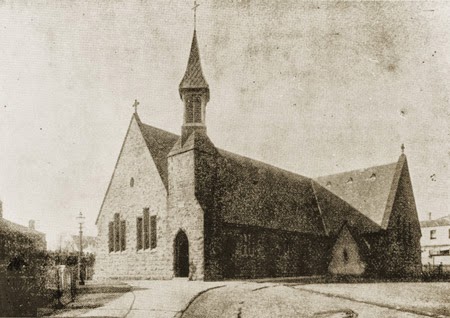 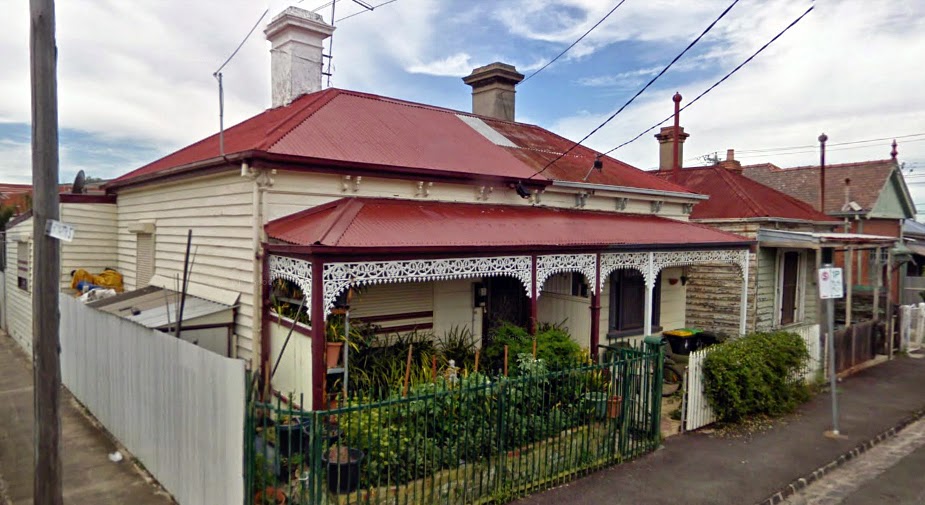 Family historian, Isabel McKenzie, described a memory from about 1919, when she and her sister stayed overnight at the home of Mary (Noonan) Black, at that time aged about 58:


"I would have been eight years old... out to Brunswick, where we met Mrs Black... Friday was no meat day and so on... but I remember in the morning having the most delicious Irish stew I'd ever tasted in my life... Mrs Black was steeped in Irish history... Protestant versus Catholic stuff... I think it was our first introduction that there was any trouble between the Irish and the English... and also the 'bookie' was calling and getting the bets..." (4)

Isabel's childhood memory of Mary coincides with the Irish War of Independence. County Cork, where Mary was born, was a major centre of the war, which culminated two year's later in the Irish Free State. It was a passionate time for the Irish in Australia too. 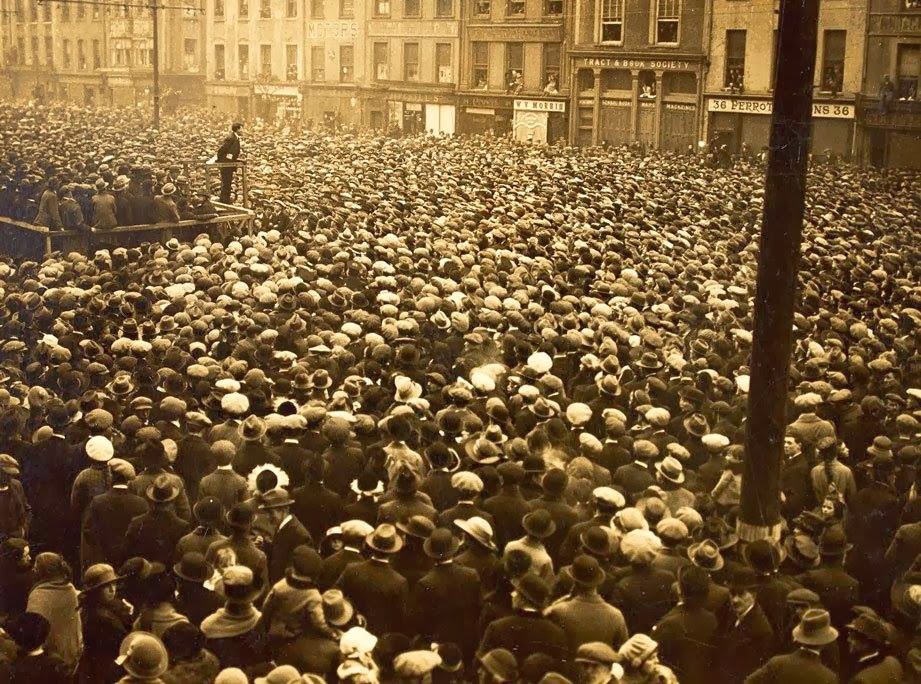 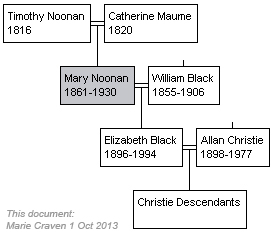 With thanks to Janene Barker, Christine Butterfield and Annette Baker for documents and media. 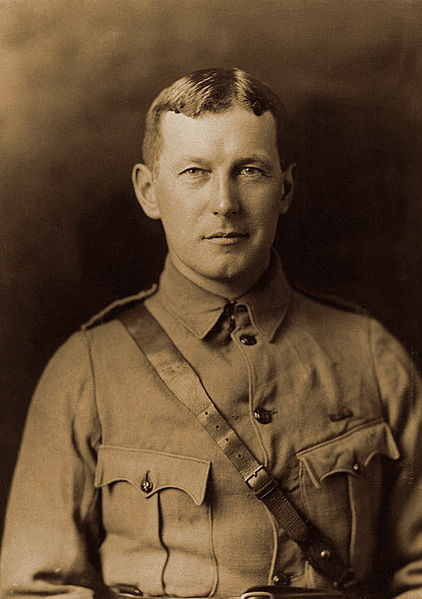 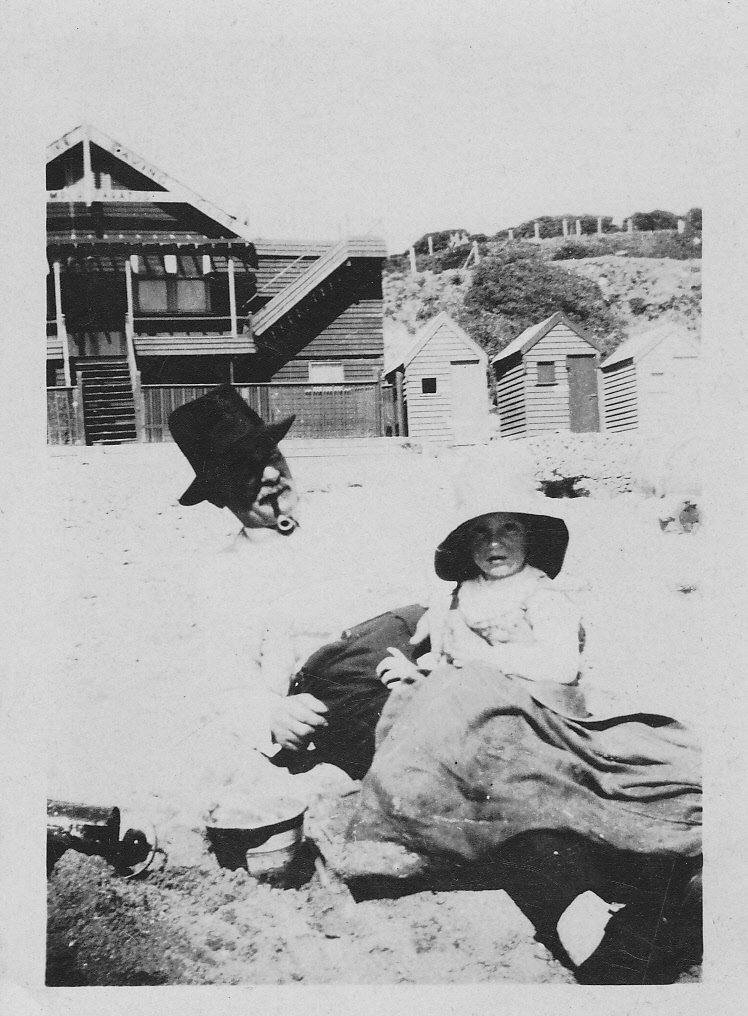 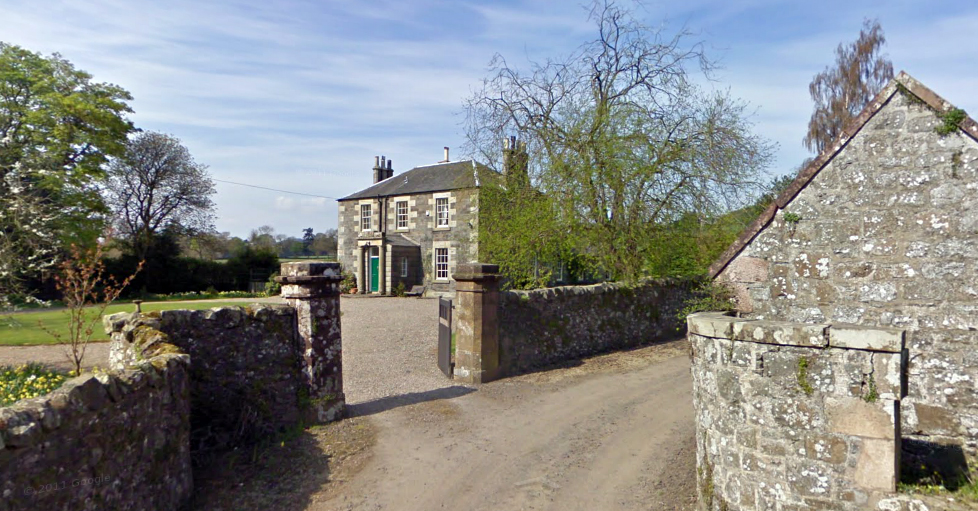 Pitgorno Estate and the Christies:
James Christie and Ann Gilmer were proprietors of Pitgorno Estate in Strathmiglo, Fife, Scotland. James 'Fuffa' Christie named his house in Clifton Hill (Melbourne) - 'Pitgorno' - after the Scottish estate that had been in the Christie family for about 150 years. There was no other place in Scotland named Pitgorno.
Sources: Strathmiglo Church monumental inscriptions; James 'Fuffa' Christie WWI records; Isabel McKenzie monograph, 'Christies and Coffeys'.

Many other records show the connections between each generation of our Christie family in Scotland, including: birth, baptism and marriage records of the siblings of each generation; census returns that show the family together in various times and places; monumental inscriptions at Strathmiglo, Fife; records showing the Christies’ proprietorship of the Pitgorno Estate; and more. The last of the Christies of Pitgorno was Fuffa’s grandfather, James Christie, who died in 1890. 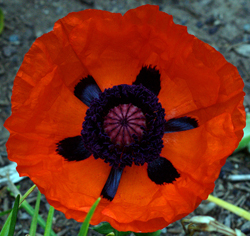 The Remembrance Poppy was inspired by John McCrae's poem, 'In Flanders Fields'

Second cousins, John McCrae (Canada) and James 'Fuffa' Christie (Australia), were both servicemen in France during WWI. This entry is made on ANZAC Day, 25 April 2013. 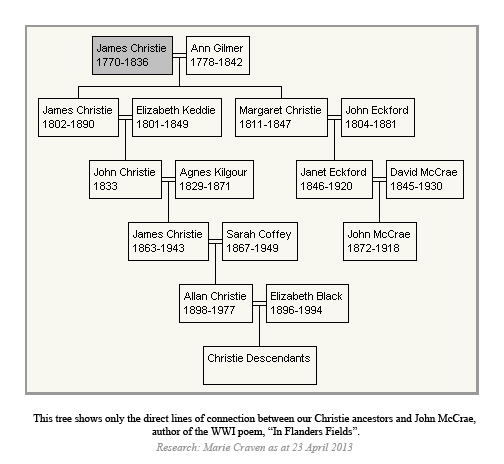 First in the series of family history accounts is an ancestor who was born over 200 years ago in London. John Coffey (c.1806-1871) was a fine craftsman in wood. In the Victoria and Albert Museum, London, are some highly valued chairs he appears to have worked on while at the Badminton Estate in Gloucestershire in the mid-1800s.


The chairs were originally created for the Dukes of Beaufort in the 1700s, designed for the 'Chinese Bedroom' at Badminton House by prominent cabinet makers, William and John Linnell. John Coffey is credited for 'japanning' the chairs in the 1830s-40s, a renovation of them at that time. To be working on these valuable pieces of furniture for such illustrious employers suggests that John was highly skilled and esteemed in his craft.


The chairs were originally designed in simple red, blue and gold. John Coffey appears to have altered the finish to black and gold with detailed oriental characters, hand painted images and fine geometric patterns. In 1992 a pair of the chairs were sold by Christies Auctions for 110,000 pound sterling.


Records show John Coffey's occupations over his years in England as cabinet maker, gilder, japanner, upholsterer and french polisher. The Badminton chairs may well be just the tip of the iceberg of many outstanding pieces of furniture he worked on. The french polishing trade he passed on to his son John, who in turn passed it down at least two further generations in New Zealand and Australia. 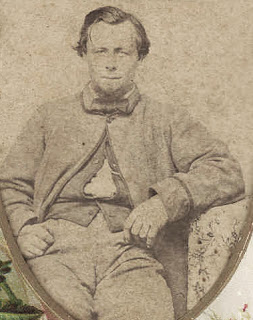 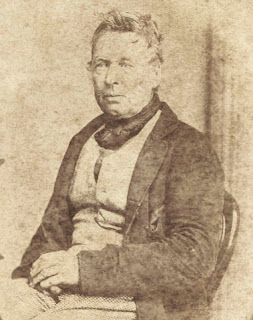 The family were back in the London area by 1851, this time in Tower Hamlets, Hackney. Daughter Eliza appears to have died in childhood before this time. After John's wife Mary died at their home in Grove Street, Hackney in 1853, the rest of the family migrated away from England over the next five years. Eldest sons Edmund and Paul had been earlier apprenticed and became ship carpenters. Paul was involved in transportation of troops in the Crimean War (1853-56) and was in Wellington, New Zealand by 1857, where he went on to become a prominent figure in the development of Wellington Harbour. In 1858 John Coffey brought his youngest son John and daughters Rachel and Ann to Auckland, New Zealand aboard the ship 'Mary Ann'.

Together with son John, he later moved for some years to Australia, where he was involved in two business partnerships in 1863-64 (Coffey Sterling and Co; and Hancock and Coffey). From their business address at 188 Castlereigh Street, Sydney, they provided furniture repair, upholstery and french polishing services. Son John (aged about 20-21) was likely working with his father during these years. Father and son (with John junior's new family) returned to Auckland around 1865, where they worked together as french polishers. John Coffey died in Auckland in 1871. He was grandfather to our nearer ancestor Sarah Coffey who married James Christie in Melbourne, Australia in 1886. 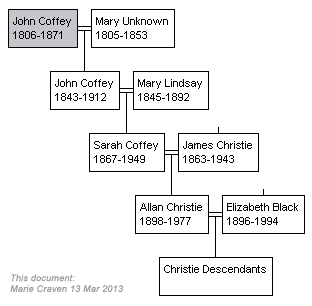 Posted by Marie Craven at Wednesday, March 13, 2013 No comments: